It happens on a Xbox One. The Xbox has been restarted after the update.
Could it be that I am assigned to a full table(thinking out loud)? 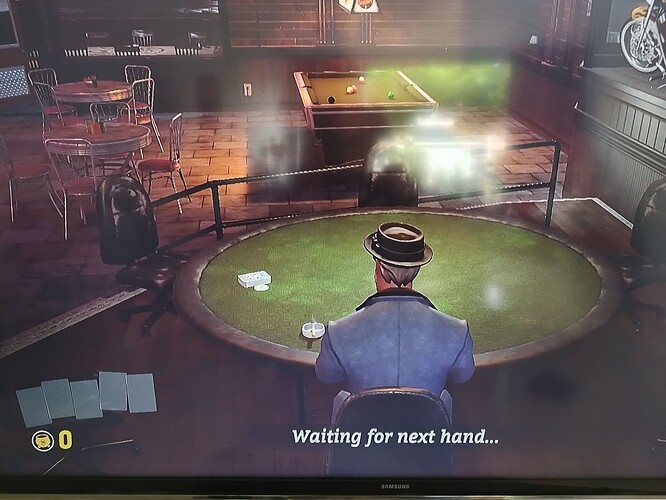 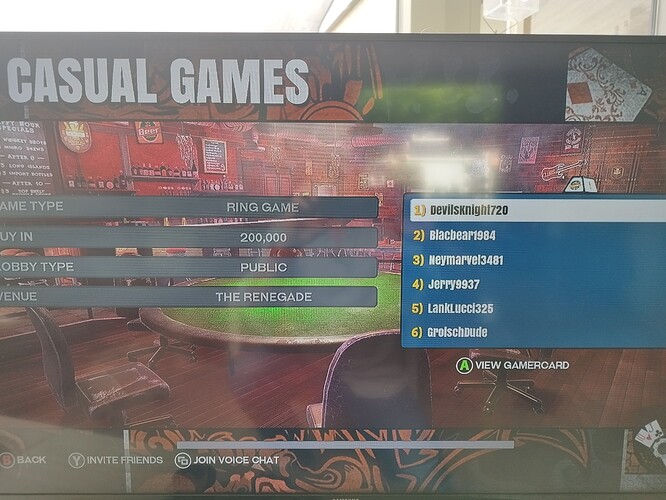 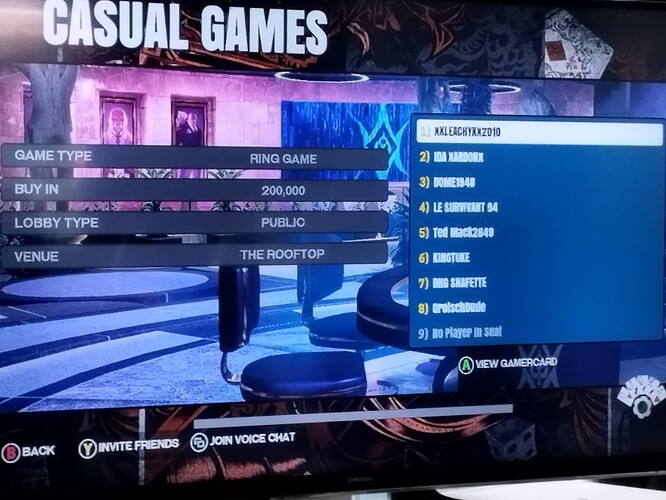 Thanks for letting us know. We’re working on fixing this server bug asap. In the meantime, we’ve disabled these broken tables and you should be able to get into a game now.

Thanks a lot for your quick response. I am playing on the rooftop right now.

Not a big bug: Did you also noticed that the usernames and the nicknames got switched on screen? 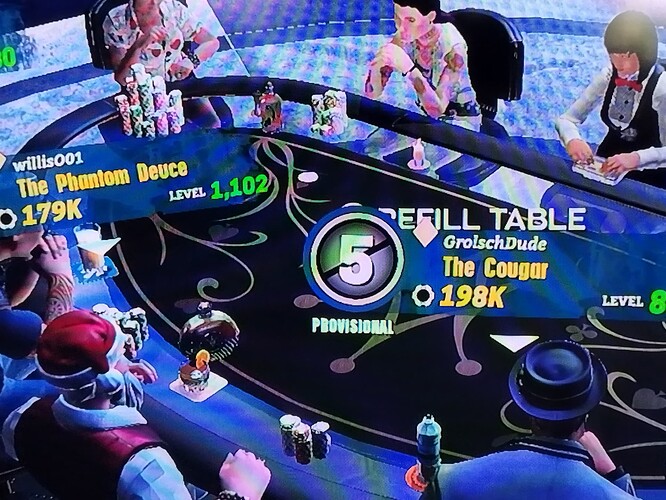 Glad you can play now. Switching user names and nicknames was intentional - it was supposed to be that way all along.

Wow, I didn’t expect that!

Well, now that everybody already used to it, I’m not sure it’s a good idea to switch it now, but I don’t mind!

I keep having this happen the check/raise/fold gets blocked and you cant see an accurate amount your trying to wager see the 9.1k on my screenshot its right in the way 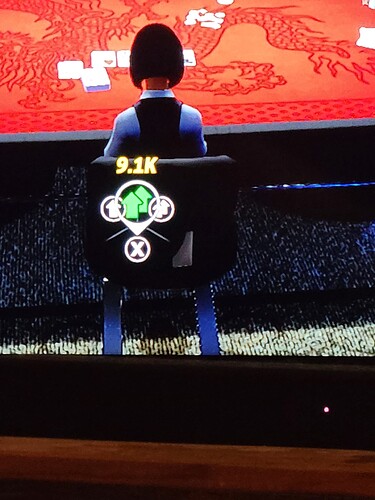 After recent update, we can’t wave when we join the table and have to wait until the first cards are dealt.

Please take away that “eh” from my avatar’s response and get rid of the tells when calling or folding.

Yeah, it’s really annoying that you can’t do an emote in your turn…

What’s wrong with the preset actions?

Bug: Upgraded loot cases deliver items as if they are not in inventory (xbox)

Resolve: Purge save, sign in, should fix (shows “welcome to” dialogues).

There is an issue with the loot crates on Xbox (one) in that my buddy will upgrade and open his crate at Epic - but it gives the items as if he didn’t own them (not even the chips for being duplicate).

I found it hard to believe so asked him to make a video and it does show him receiving items he already has (he has everything for the guy, except some new unlocks).
We checked and it is defintely not awarding the items value in chips nor is it giving it for the other gender so…

The upgraded boxes, for him, are not working.

For me (coming back after months away) I still had my 2mil rewards waiting and also a boost on the first and 7th box I opened (3days), so …

It is unclear what is causing the issue.

He deleted the save data on the xbox and when reloading it said things like “welcome to the shop” and “here’s how this works” as if he had never been there before.

Some items he didn’t own and had to buy again (but couldn’t remember if he owned them anyway).
But, to make sure there is connection to the transaction server - he buys everything he can (other than key fobx).

He’s also told about the tournametns as if never been there before (guy is almost level 1900, so we’re not new).

After a long time tapping out hands until he had a level for a box - he then upgrades the box again and when it is opened - it is back to being 60k, 150k, boost boxes.

oh, it didnt fix it…

it might have just been 60k chips last time -this time was a clothing item that was being worn by the player at the time.

I can’t figure it out…

Simply - upgraded boxes do not register any item (inc. loot case only award) as owned, so not as duplicate. Therefore will give any item over and over, without even the duplicate chips % of valuereward.

We’re unable to reproduce this. What is your buddy’s gamertag?

Hi, thanks for the reply.

For him, also - the system never reports the changes in table item every few hours.
I’m not sure if there is some transaction server that his connection is not making.

// he says he is not the only one with the issue - stickybunzzz & mrstickybunz#830 are also suffering the same issue (they are in NZ, Cy is in UK).

// some of the ppl who just grind the 100 chip head to heads (cy is one of them who does tournies too) such as eroll, gracefulbear, supercabbie, serginio, etc… seem to have stopped playing a lot as they aren’t getting the duplicate item chip reward out of the loot cases.
A few of those guys had thousand of loot cases and hundreds of days of boost! Crazy… (boring).

// there is however, a reproducible bug which is: -open emote menu with b, have person before raise you, force-switches UI to call/raise/fold but cannot control as control is locked in emote - can workaround by going to start menu and back to quickly check/fold.