What the hell does that supposed to mean?

Can someone clarify this please? 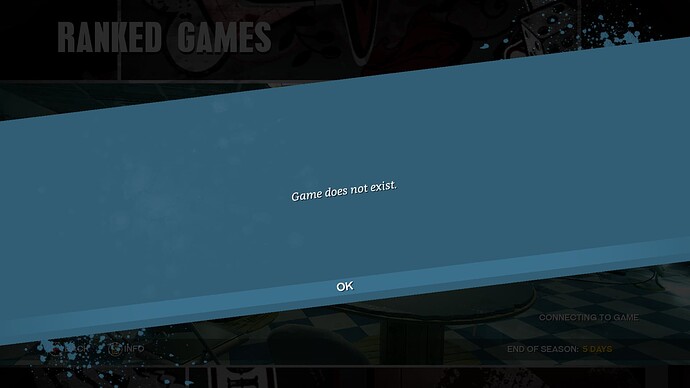 I was playing ranked tournament and lost my server connection and was placed in 'sot-out mode. I received this message when I attempted to rejoin the game and the tournament ha d already ended.
I’ve als seen it happen when Xcox Live has an issue.

Ah, thank you for your insight on this. However, these cannot be the causes for me, because it’s not a connectivity issue on Steam, since this only occurs under certain circumstances. And also, the said game didn’t even started. I was only in the lobby.

Thus, I’m extremely curious. I’m looking forward to a response from a developer, because I think it’s abnormal that I get these in the lobby.

That sounds odd.
As a former programmer. it would be helpful when reporting a problem, that you detail the circumstances as you did in your second post,

I don’t think there are a lot of cases where this is the game’s response, but okay. Ranked heads up it is. While I’m waiting for a player sometimes certain type of players (with a specific behavior) show up and if I get paired with them, then before the game starts to load (before the blue bar shows up) this message is what I get and the game gets stuck at this state. If I click the Ok button the message disappears, but I’m still paired with that player and it won’t start loading. If I try to go back to cancel this game the Back button stays grayed out and it won’t go back. All I can do is force stop the game and reopen it. That’s it.